The key players on this hour-long concert recording are French saxophonist Jean-Luc Guionnet and Bertrand Denzler, who play soft, long tones, that gently fluctuate with the player's breath, and they employ a wide range of percussive attacks. Mattin offers well-judged silences, low level hums and often brief but frequently violent burst of distorted sound.  To produce his arbitrarily created but pleasingly percussive array of rattles, clicks and soft clanks, Taku Unami flips his speakers onto their backs, places small resonant objects on the speakers cones and activates the cones with computer generated sounds that often lie outside the range of human audibility. Between them, the players make a music that intrigues and engages throughout.
Brian Marley 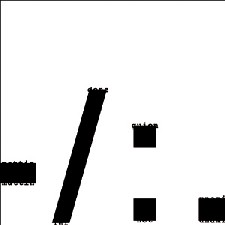 So I spent a good portion of this past weekend, interspersed with shepherding niece's children around, listening to all those Fargones and there were several that stood out. Aside from the previously mentioned "Momeht Ybaxehnr" disc, the one illustrated here from a the quartet of Mattin (computer), Jean-Luc Guionnet and Bertrand Denzler (saxophones) and Taku Unami (computer-controlled toys), a live date engagingly titled, "-/:.", works very well. And Jeph Jerman's "Lithiary", sourced from shaker-tables filled with rocks, is superb. A real surprise, with some wonderful tracks, is Eric Alexandrakis' "Electro-Organic", a kind of rethinking of 80s techno-pop that comes across as a fine cross between Fennesz and the original Love of Life Orchestra. Even the pure noise stuff, related to the things I wrote about in my previous post, had far more nuance (and far less obnoxiousness) than I'd expected. Glad to have heard it all.

An intriguing and wide-ranging live date from a quartet made up of two computers and two saxophonists. Saying “two computers” is even a little bit misleading as Unami appears to be using his to send his collection of small toys scurrying across a tabletop, contributing more of a delicately percussive sound. The whole set, in fact, tends more toward the quiet end of things, albeit with the occasional eruption. Denzler and Guionnet do a fine job of not simply avoiding all traditional saxophone timbres at all costs but rather interspersing a variety of attacks as needed at the moment. It’s always interesting to hear when one ostensibly “definitive” technique (or rejection of same) over time comes to be seen as merely a step along a path. The integration with Mattin’s generally soft electronics is seamless and persuasive. As one of the relative few (I think) who really enjoyed Unami’s toys at last year’s ErstQuake, I regret not being able to watch them in action, but their seasoning, when apparent, adds a very nice touch here. Good, subtle stuff in large part.