Bilbo's Incinerator (w.m.o/r 17) by Billy Bao is gorgeously noisy rock-aktion by a Nigierian expatriate and two Spaniards (with connection to the great la Secta). Guitar, drums ans vocals create a most primitively disturbed, overtly political kind of punked-out spectrum-dodge that will appeal to anyone who is interested in what Billy calls '' the degeneration of rack 'n' roll''. The sound here  (especially on the title track) is classic- in the direct line of high level scumbos everywhere. There's feedback, scuzz and insane trumping and screaming for all. You'd have to place this on a virtual level with The Afflicted Man, and that's one heckuva magnificent achievement.
Byron Coley

An essay on the back cover of this EP gives a few clues as to what’s at stake: Bao, a Nigerian vocalist, traveled to Bilboa, a touristy location in the Basque region of Spain. Experiencing the same feelings of oppression he felt in Lagos, Bao found an out through punk rock, quickly assembled a trio of drums and guitar, and spent three hours in a studio channeling his rage. The results are on this 7”, and it is punishingly prescient. Lyrics deal with state control of expression, a horrifying metaphor for what the third-world disenfranchised might like to do to people of privilege (“Give Them Virus”), and gentrification’s effects on those it pushes out. Ugly, atonal, and pounding, these three primitive rock songs slug their way through outbursts of power electronic noise, jackhammer rhythms, and thrashy, repetitive guitar. Vocals sound like the second coming of Kickboy Face, and this as a whole comes off as a terrifyingly real example of what human beings are capable of if pushed far enough. The real world equivalent to the Pissed Jeans 7”. An important record. 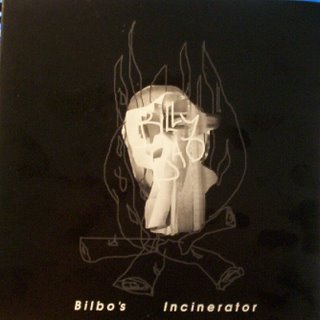 I know I'm preachin to the choir when I say that there is singers, bands 'n records within the unhinged canon of Punk that's so sick & twisted in effort 'n production that they cannot be topped. You find'em on the Killed By Death, Bloodstains & Back To Front comps pretty easily & I bet there's fellers here in blogland readin this what's got a list of favorites. I can see it now (in no particular order); Freestone, Detention, Tampax, Mad Virgins, etc. And bein as how such a thing'd be totally subjective, it's possible that none of them bands'd make it on some goober's entry, which's okay, but if said thinkpad didn't offer up Bobby Soxx, it'd be hard to take seriously. Let's face it, the "Learn To Hate in the 80's' 7" sits at the contorted, unconditional apex of the genre. Nobody spit it out quite like that, the bile 'n menace couldn't have been more provocative or challenging. Never heard it? Your loss friend. The deceptively simple recipe is as follows; take a basic beat, pummel it, mix in a sparse, raw sound & glaze it w/a throatful of grackled rasp. Many have tried & the results have been estimable, at times notoriously so (Kilsug anyone?), but nobody on my watch has plunged to the depths of exuberant barbarism & gargled Hell like Bobby Soxx.
That is until Billy Bao showed up.
Unfamiliar? Well bud, hopefully not for long, cause Billy Bao has a 7" (& cd/ep) that's of today & it erupts like fissures of primordial ash 'n pumice from a toxic lava of Punk Brut that is most refreshing & revelatory. No stone is left unturned, ie., Billy Bao & his mission; formerly an unknown songwriter from Nigeria who emigrated to Bilbao, he discovered Punk Rock & has channeled it to "fight the system that fucks up everyday of our life". When he screams out "You can not dance like an spastic fuck"!, who are we to question? Teaming up w/"the most primitive drummer" & "noisiest guitarrist" in Bilbao, he formed the band under his own name & it is such a rare, goddamn thing of pure, discordant ecstasy that even ol' Doc Marten & Chuck Taylor are willing to hug it out for an erstwhile detente. And as I mentioned earlier, there's a 4 song cd that takes up-Stickmen With Rayguns like-where the 7" leaves off. If this is what a steady diet of Bacalo & Rioja gets you these days.....well, it beats the livin shit outta Texas Tommy's 'n Lone Star Beer. And only by a mile're two. He might not wallow in the same cesspool as Bobby Soxx, but Billy Bao has the shine & ain't that the why of it all in the end? Too bad there ain't any real distribution for his stuff or you'd know what your missin out on. Write to http://www.mattin.org/ & see if you agree.
posted by Siltblog at 7:51 AM 0 comments

Billy Bao is Nigeria’s answer to Stickmen With Rayguns-era Bobby Soxx. On the back cover of his debut 7”, Billy describes his journey, beginning in Lagos where he was an ignored songwriter and soloist looking for a creative spark and outlet. It was in San Francisco, Spain, in the Basque area of Bilbao, that Billy discovered punk rock’s primal energy, and he became inspired to make this abhorrent pummeling scuzzrock that is so extremely harrowing. He hooked up with the drummer of La Secta and other local SOB’s and made this three-song EP of unbridled anger and despair which was released about a year ago, but is only finally starting to get distributed to the States. A full-length CD also came out a few months ago, and I’m anxious to hear it, too. This stuff is as scathing, violent, and agonizing as the Brainbombs.